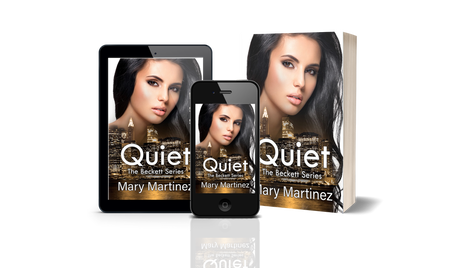 Christine Beckett’s dream of partnership in a prestigious New York City law firm has finally come to fruition. She has financial security, a loving family, and owns her home, why does she need a man?

Detective Solomon has worked with Tyler Beckett on several cases, he almost feels he is part of the Beckett clan. He considers them his good friends, except for Christine who seems to look down her professional nose at him.

Christine receives a threatening note and her townhouse echoes with mysterious cries in the night. That is when the handsome and irritating detective insists he temporarily move in to protect her. To add insult, it is with her family’s blessing.
Reviews:

5 Star review by #1 Bestselling author and Top Amazon and Goodreads Reviewer,
RJ Parker
This story really is good with a lot of suspense and some action. I liked it and I would recommend it. See more…

RomFan Reviews~Book 3 of The Beckett Series is without a doubt my absolute favorite.

David decided this would be a good time to make his exit. He stepped forward, the movement brought attention from all.

“Tyler and Keira, you will make great parents. Your child will be one lucky kid. Congratulations.” He held out his hand for Tyler.

Keira grabbed his hand first and pulled him into an embrace. “David. Thank you so much.” She stepped back, to let her husband shake his hand. “I’m glad you could come.”

“Wouldn’t miss it.” David had first met Keira on a case. She come to the Big Apple for excitement and hadn’t been in the city long before she’d found herself neck deep in trouble. Tyler had saved her pretty ass and the rest, as they say, is history.

David shook Tyler’s hand and clapped him on the shoulder. “Nice job.”

“Thanks,” Tyler said. “I may be calling you in the middle of the night for tips on crying babies, you wouldn’t mind?”

David chuckled. “Anytime. Except I draw the line on baby advice after ten p.m.”

Now smile at Christine and get the hell out of here.

“David dear, you live in Manhattan don’t you?” Martha asked. For some reason she called everyone ‘dear’. And that person didn’t necessarily need to be her offspring.

“Yes.” Wary. That gleam couldn’t be good. What could she have up her sleeve?

“Christine,” Martha then turned to her prickly daughter. “You said all of those boxes wouldn’t fit into your car, right? I’ll bet David wouldn’t mind loading some in his.” On the last word Martha swung her gaze to him.

Oh yeah, there was an old-fashioned match-making gleam there. “You wouldn’t would you, David?”

He could hardly say ‘no’ after all of their hospitality over the few years he’d known the family. His only consolation was the fact Christine looked ready to explode. Temper made her checks flushed and her eyes darken to a rich color of chipotle pepper.

That was all the encouragement he needed.

The older woman gave him a playful slap. “Martha.”

He grinned. What else could he do, she was incorrigible. “Martha, then.”

“Ma, the man probably has plans.” Then Christine turned to him, lowered brows looking like a bull ready to charge. “Really Detective there’s no reason for you to bother. I can make another trip.”

Oh yes, Martha had a definite something up her sleeve.

“Christine, your Mother is right,” David said, trying not to let on that he enjoyed her discomfort. “There is no need for you to come back to Brooklyn when I have a SUV parked right out front.”

Christine tried to reign in her temper. If only she could do a quick turn to lose him. That would be pointless as they were still in Brooklyn. And besides, he had her things. How had her mother manipulated him into helping? What? Did she think since she had two children paired up she had to dabble in Christine’s love life?

And why had the Detective looked so happy to accommodate? He didn’t like her any better than she liked him.