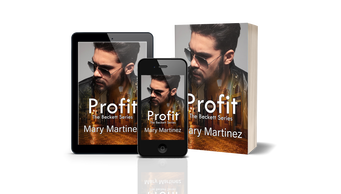 It was good to be away from work and all the drama. After a year and a half they—they being the FBI special terrorist task force his sister, Reagan, worked for—weren’t any closer to finding who was behind the murders of three top executives of the World Banking Association, known to the world as WBA. This made it dicey for those who worked for the WBA and its five entities. Were they random murders as the media had come to believe? Or were they murders set to be the beginning of a takeover of the WBA, for God only knew the reasons, as the FBI believed?

Matt Beckett sipped his cranberry and vodka while he surveyed his family. As the syrupy sweetness hit his stomach, he grimaced at the pink liquid. Who the hell gave him this sissy drink?

“Brother, why the serious face? It’s Christmas. You know, Ho, Ho, Ho, and all that huggy feely stuff.” Reagan took a sip of the amber liquid in her glass.

Matt ignored her question. “How the hell did you get a grown-up drink?”

“I poured my own.” Reagan glanced around the room. “Ma would kill me if I talked shop, but I suspect that’s what you were thinking?”

Martha, the matriarch of the Beckett clan, and one-half of the Elders, joined the two, wrapped an arm around both her children, gave a hug and stepped away.

“No shop talk or you’re banned from Christmas dinner.”

“Ma, you can’t ban me from a home-cooked meal.” Matt looked down his body. “Look at me, I’m skin and bones, because I don’t have a good woman to cook for me.”

Martha gave him a light slug to the shoulder. “And whose fault is that, young man?”

“Yeah?” Reagan raised a brow at him and took another sip. “How’s the lovely Bryn?”

Martha gasped and looked at him. Damn Reagan. Now his mother was going to hound him.

“Who is Bryn?” Martha’s eyes twinkled in anticipation.

He shot Reagan a look that he hoped conveyed that she would pay. “Bryn is a woman I work with from time to time at WBA.”
“She works at DIG?” Referring to one of the five entities of WBA.

He sighed, he might as well get the Q & A over with since she’d just keep at him until he gave in anyway. His mother could be like a dog with a bone.

“No, she’s with Corporation of International Finance, or CIF, she’s their Chief Auditor Executive.” He glanced at his sister who stood sipping her drink innocently and glared. “She is a very nice person and no, before you ask, we are not seeing each other.”

“Not that he doesn’t want to see her, she just has better taste in men.” Reagan laughed.

“Reagan, any woman would be lucky to date your brother.”

Matt held in a groan. Man, he needed to get out of here. He looked to his brother, brothers-in-law, anyone to rescue him. But Reagan wasn’t going to let that happen.

“Ma, you’d love her. She has the most beautiful red hair, green eyes, and she speaks with this lovely Irish accent.”

Matt looked down at his niece, Lucy, he wanted to give her a big kiss for interrupting. But the little one was currently pulling on Reagan’s jean clad leg. His sister set her glass on the side table and swung Lucy up above her head, her giggles drew the attention of everyone in the room.

Escape. Matt didn’t waste any time, while his mother and sister were occupied with the adorable dark haired cutie he raced toward his brothers and talk of football.

Except when he joined them, the subject was hockey. That worked. As long as it wasn’t about a long legged redhead that wouldn’t give him the time of day. Yet she had a starring role in every single one of his dreams for almost five years now, it was sort of pathetic. And most the time he woke up and had to start his day with a cold shower.

“Who do you think, Gabe?” Matt asked.

“No way, the Rangers are going all the way this year.”

Matt shook his head. He wasn’t a big hockey fan, but if he had to be, then it would be Rangers all the way. David grabbed a beer out of the mini fridge by the sideboard. He held it up in question to the others. After giving everyone their beer, he straightened and gave his attention to Matt.

“I’m more of a baseball fan, but I’m going with the Rangers for the cup.”

Tyler patted him on the back good naturedly, then looked over to Keira and gave her what Matt had always called that secret smile. The two had a connection, one he hadn’t realized he was jealous of, until he’d met Bryn. Man, he had it bad.
Think about something else, brother.

“Tyler, it’s been over a year since they put the case of the three execs to bed. I have this itchy feeling that things are going to heat up again.”

“Yeah, I’ve been thinking Phillips may surface any time. I am not a fan of public opinion. We need to figure out what his new plan is.” Tyler took a gulp of his amber ale.

Gabe cut Matt off. “He’s been thinking. Is this good or bad?”

“Shut up.” Matt bumped him with his fist. “I’m serious. Shouldn’t I get a gun permit so I can have a gun for protection?”

“Whoa there buddy. Do you even know how to shoot a gun?” David raised a brow.

“No, I figure coming from a cloak and dagger family, one of you will feel responsible enough to teach me.” Matt sipped his own beer and looked toward Reagan and Paco as they made their way over to join in the conversation.

“If the Elders catch you boys talking shop there will be hell to pay.” Reagan swung the fridge door open and grabbed her and Paco a bottle.

“What’s up?” Paco popped the cap and chugged a good portion down while waiting for the answer.

“Accounting boy here wants to learn how to play with guns.” Tyler laughed, as if it were the biggest joke, and Matt would blow his foot off or something. Some things never changed. Sometimes he still wanted to haul off and belt his older brother.

“Simmer down, brother. Tyler, maybe you should watch what you say. Matt’s been working out since we were in high school, he’d probably whop your ass.”

The group burst out laughing at that statement. Which, of course, drew the attention of the female Elder.

“There is no talking shop today!”

“Nana, may I serve dessert?” Gabby asked as soon as she scooped up and shoved the last bit of turkey into her mouth.

“Gabby, it’s not polite to talk with your mouth full.” Paco winked at the girl. “Besides, how can you even think about dessert? You ate more than I did.”

Gabby sat up higher in her chair, her thin frame proving that she’d be one of the lucky ones. A woman like her mother, who could eat everything and still looked like she could be a model on the cover of Vogue.

“I did not. No one can eat as much as you do. Mom said that she may need to get a part-time job to feed you.” Gabby tilted her head to the side and waited for his response.

“Actually, Gabby girl, I was thinking about you when I said I needed more money for groceries.”

“I am a growing girl. My health teacher said that my body needs extra calories as it develops. That’s just the way it is. So you just better get that extra job.”

“I guess I need to cut down on my calories because my body is growing in the wrong direction.” Sophie frowned. “Maybe I shouldn’t have a cookie.”

“Soph, believe me, you’ll be fine.” Gabby patted her cousin on the shoulder. “You should have seen me at your age. Chunk a monk. You look like a starving waif compared to how I looked. You’ll grow out of it just like I did.”

Matt held in a chuckle. The family had missed so much of Gabby growing up. Reagan had her when she was a young and confused girl. Giving her up for adoption had been one of the hardest things for his sister. Though no one had known about it until the Headman had found Gabby and used her to lure Reagan away. And thank God she had survived, as had Gabby. Now he couldn’t imagine the family without his niece.

“This is Christmas. At our house, holidays have no such thing as calories,” his mother declared.

Sophie grinned, then winked at her dad, David. “Can I tell everyone?”

Matt had never thought his sister would ever marry, then David came along and swept her off her feet. He’d heard it wasn’t quite as easy as it sounded, she’d wanted nothing to do with him. Meanwhile, Christine’s step-daughter waited for an answer.

She had baby Benjamin bouncing on her knee. Matt had always thought that was an expression, but there was visual proof that a person could actually bounce a child on one’s knee without breaking his or her head or anything.

“Let’s not draw it out, what’s up?” Keira, Tyler’s loving wife and mother of Lucy, piped up with a stern look to her sister-in-law.

“Can I?” Sophie repeated, almost bouncing off of her chair in her excitement.

Gabby placed a hand on Sophie’s shoulder. “Settle down Soph.”

Christine laughed. “Well, Christmas is the time for surprises. Go for it.”

Here it goes. Matt was going to be a new uncle. At this rate there’d be no room for his own kids if and when he had any.

“We’re going to Disney World for my birthday and Mom said that if it’s okay with Aunt Reagan, Gabby could come too.”

Silence surrounded the family table. Matt was sure that the Elders were disappointed. He’d been ready to bet the family jewels on a new addition.  Then a few chuckles went around the table until David, realizing what everyone thought, burst out laughing.

“Well….” Christine chuckled herself. “What did you think Sophie was about to announce?"

“Nothing, dear.” Martha’s voice quivered slightly. “Sophie that is wonderful. Are you staying at the park?”

“Mom, Paco, may I go? I’ve always wanted to go to Epcot.” Gabby threw her arm around Sophie’s shoulders. A few years of attitude dropping at the prospect of going to the happiest place on earth.

Reagan, on the spot, looked to Paco who grinned and shrugged. Christine probably should have cleared it with her sister first. Maybe she’d meant to, but Sophie, in her eagerness, hadn’t given her the chance.

“I think so, but it will depend on your grades.”

A groan from both girls sounded around the table. Fred, his dad, took his glasses off and wiped them clean. A sure sign of emotion.

Christine stood and went to their dad and patted his shoulder. “I’m sorry you’re disappointed.”

“Why would papa be disappointed?” Sophie wanted to know.

“Duh, because the way you were jumping around everyone thought you were going to announce a new baby or something, not Disney World,” Gabby said in a tone reserved for teenagers.

Sophie didn’t say anything but grinned at her dad and then at Christine. David threw his arm around each of them.

“Okay. If you insist.” He winked at Christine, then Sophie, and turned his attention to the family. “We’re going to have a little one.”
​
God, his family could really turn on the drama. They’d be busting at the seams soon. And there went that room for his kids, which didn’t seem likely, as he couldn’t even sweet talk a full sentence from the lovely Bryn, unless it was about work.