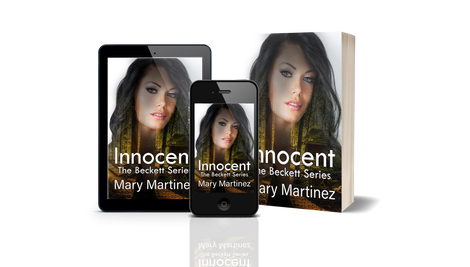 All Jessica wants is a home and family. So how did she suddenly find herself falsely accused of a felony and then kidnapped by a hit man?

Jessica Beckett loves teaching high school algebra. That is until Coach Brinley makes her life miserable because she actually has the audacity to fail his three staring football jocks. Maybe if they’d done their homework they would have passed. She refuses to be intimidated. He on the other hand refuses to admit defeat and manipulates the boys into accusing her of sex in exchange for passing grades.

Gabriel Despain loves being an FBI agent. But falling for his partner’s sister has complications. It would be easier to ignore his feelings if Jessica hadn't found herself in trouble. Now he must keep her safe. If he can't remain objective, they might end up dead.
Reviews:

Four out of 5 by Mellysw From The Romance Reviews:
Jessica is a young, sweet math teacher who still lives at home with her parents. Gabe is an FBI agent who spends his nights (and sometimes days) operating undercover – often in disguise as a homeless man. Their wildly different lives merge with a few different odd twists of fate and friendship, and romance follows in INNOCENT by Mary Martinez. Full Review here...

Four Stars from Amazon Review: My favorite parts of the book? The main bad guy! He was awesome! And the whodunit twist – I won't give it away but I never saw it coming! This was a fun, entertaining book to read, Read More....

“Don’t look now, but I think we’re about to be attacked.” Captain Abe Rothschild voice was filled with mirth.

Gabe knew he wasn’t going to like whatever it was the Cap was referring. Glancing over his shoulder, he held back a groan.

Jessica had a determined glint in her eye as she swooped full speed ahead. And he was her target. Why hadn’t he taken the chance to leave earlier? Now it was too late. He really didn’t want to cause a scene during the wedding. His friend, not to mention Tyler’s parents, would never forgive him.

“May I have a word with you?” Jessica’s voice brooked no argument. And no way to gracefully say no.  Jessica glanced at Rothschild. “Hi Cap. Sorry to interrupt, but I need a little privacy with your agent.”

Gabe watched his safety net saunter away, an amused smirk on his face.

“This isn’t the place Jessica, why don’t we have coffee next week.”

She tapped her high-heeled shoe, drawing his notice to her delicate feet, pink toenails matching the color of her bridesmaid dress. Sexy. He gulped. He needed to leave or he’d do something stupid.

“You know damn well you’ll ditch me for coffee. We need to talk now. What we had is not over.”

“Jessica.” Martha Beckett’s voice traveled to his ears. He’d never been so glad to be interrupted by a woman’s mother before.

Jessica wasn’t so happy, she gave him a warning glare, then turned to call to her mother. “I’ll be there in a minute mom.”
“Look Jessica, I promise we’ll talk later.”

She reached over and grasped his arm her delicate hand, had a good grip, she was anything but weak. Electric shocks ran up his arm and for a moment, all he could think about was her long legs wrapped around his waist.

Beads of sweat popped up on his forehead, he felt them start to trickle down the side of his face. He swiped them with one hand. He had to get out of there.

“I’ve got to go.” He wrenched his arm away, she stumbled a little. “Sorry.” He mumbled, but didn’t stop.

The gate blocked his path, he grasped the wood pulled it open, feeling a sliver slice into his thumb in the process. Too intent on escape. He hardly noticed the sting. The gate literally smacked him in the butt as he left.

Safe. But for how long?