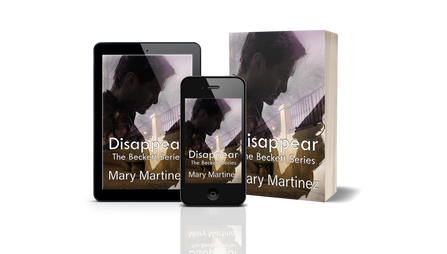 ​After two years undercover as an FBI agent to infiltrate a crime organization and discover the identity of a hit man, Tyler Beckett’s cover is blown. Tyler’s new assignment is to protect the only witness who can identify the mysterious killer. If only he didn’t find her so attractive. Each day it becomes harder to keep his objective, especially since he knows the interest is mutual.

Keira Cavanaugh is the only witness to a hit ordered by a crime boss.  The safe house is compromised and the same hit man shoots Tyler. Fearing Tyler is dead, Keira plans revenge on the crime organization. She must fake her own suicide in order to survive.

When Tyler discovers what Keira plans, he realizes he must stop her before he loses her for good.
Reviews:

The Romance Reviews Top Pick
"This is my first read of this author, Mary Martinez, and believe me I will be anxiously waiting for Innocent to be coming out this summer and read what will bring Jessica and Gabe together again. I highly recommend DISAPPEAR to readers that love to read a very well written, suspenseful, mysterious and passionate book. DISAPPEAR will leave you breathless." 5 stars from CozyReader Read more…

Bec from The Romance Studio, gives it 4.5 hearts and says: Ms. Martinez has proven herself with this book and has me looking forward to the next installment of this series. Read more…

Soliloquy (Kaitlin Michelle) says: Lots and lots of action in this thrilling romance!  I will definitely be reading book #2, because I loved this book.. this book is for you! It definitely is can’t-put-down-able. Read more…

Smitten by Reading gives Disappear an A- This book has it all. There's murder, intrigue... The reading of this book was totally addicting and now I am dying to Gabe and Jessica's story... Read more…

Keira turned in her seat to look at Tyler. His jaw tight, eyes trained on the road. They’d been traveling together long enough she’d stopped seeing the similarities between his looks and the killer’s. Now all she noticed were the dissimilarities and ever since that turning point, she’d been fighting a battle of attraction herself. For him to just climb out of the car, then the next minute declare nothing had happened, really pissed her off.

Was that the only reason she was important to him, to catch Battista? Great he was the typical male, just trying to get in her panties. Now that he’d decided she was too important for that, he’d probably drop her at the safe house and go find a woman. That brought on a wave of jealousy so intense it shocked her. She’d never been a jealous person.

“Where are we going?” She realized she had no idea where the safe house was.

At least this was a much safer topic for her thoughts. Not watching him in her mind with some other woman locked in an embrace where she wanted to be. Jeez, she had it bad. Well she’d have to borrow a page from his book and pretend he didn’t matter. Should be easy, after all she’d just met him.

She jumped and brought her attention back, she’d forgotten about the question. “Are we staying in a hotel there?”

“No. A friend of mine has a place. It’s remote, in the Catskill mountains, where we won’t be bothered.”

Those words gave her pause. Not because of her attraction to him, but because they wouldn’t be close to help if needed.

“Anyone else know where this cabin is?”

“Only the owner and she won’t tell.”

She? That green monster rippled through her body again and she couldn’t hold back. “And she won’t mind you’re taking another woman there?”

She turned her attention to the road, and ridiculously blinking back tears. Out of the corner of her eye, saw him briefly turn his head and glare at her.

“She wants justice probably more than anyone.” He paused as if in thought.

She waited for him to continue, when he didn’t she couldn’t contain her curiosity. “Why?”

“She’s my cousin by marriage,” he said, and looked at her a little strange. “And the victim’s wife.”